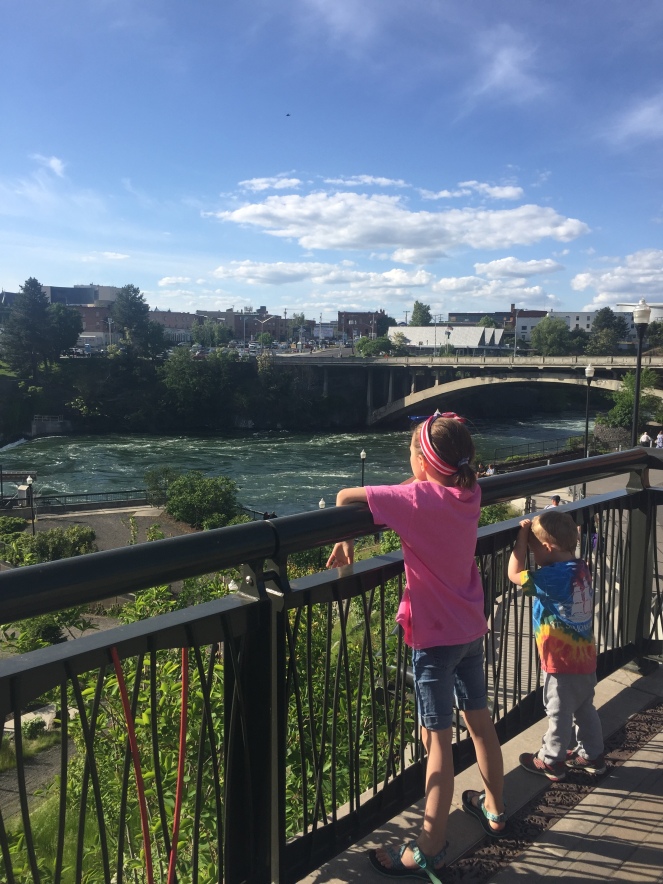 Sorry it took me so long friends. In the reality that is life, I’ve been stewing over the drama of new home-ownership, and kicking myself for some of the stupidity that we (my husband and I) have shown, or, in fairness, the ignorance we’ve lived under because we didn’t ask enough questions. Namely understanding all the differences in cost of living between one state and another (hello, Michigan car insurance rates) and the actual cost of home renovation vs. what Fixer Upper and Property Brothers might have led my overly optimistic soul to believe. Oy. Lots of crying over the budget. But all’s well now.

Why did I give you that little prelude? Aside from minutely venting my own frustrations, it highlights a HUGE part of why I wanted to do this cross-country road trip with my kiddos to begin with. And the fact that we’ve survived multiple weeks in a little extended-stay definitely-not-luxury hotel as a family is probably enormously related to the fact that we survived multiple weeks on the road, sleeping in tents, without access to much other than what the great outdoors had to offer. The other thing we saw on our trip? The country we live in is vastly different than a simple assimilation of major metropolises like the ones in which we’ve lived. You guys. What I saw in this drive across America changed so much of my perspective, and it reminded me of why I have to get my children out in the world to see it.

So let me get us started. Here’s the rundown of our trip by state, and I’ll highlight over the next series of posts some of what we did, what we saw, and what we plan to do with it:

The kids counted thirteen states that we drove through, and as I mentioned in my last post, the journey covered mostly scenic roads and two-lane highways, so we saw the small towns and countryside of the northwest and middle America. It was awesome. But it was also very jarring. As we drove from our first waaaaay amazing campsite in the forests of Idaho, we discovered how wild the west really is.

This year in our homeschool we covered early American history and westward expansion. My kids traced the Oregon, California, Mormon, Santa Fe, Gila, and Old Spanish trails west from Independence, Missouri to their final destinations on maps more times than they could count. We checked out Don’t Know Much About the Pioneers from our library, and learned about the Louisiana Purchase, the Homestead Act, the Gold Rush, and yes, the infamous Donner Party. We learned that maps were not necessarily the most reliable, and that even though the government was offering land for cheap, the trade-off wasn’t exactly that dream home with a view that you’d always wanted. In case you don’t remember (and to save you the wikipedia lookup), the Donner Party followed a shortcut featured on a map that actually led them through impassible mountains in a blizzard, which killed all their animals, half the people in their wagon train, and resorted to them eating things like tree bark, and…other stuff. Not pleasant.

And while our trip was in our four wheel drive SUV and had all the comforts of grocery-store food throughout the journey, we weren’t without the trials of severely misjudged map-following. Most of this trip took us through areas with no cell signal, and more often than not our GPS functionality was minimal. But never to worry! We had an atlas! *shakes head, rolls eyes. In seeking our first campsite, we drove to the wrong section of Payette National Forest, which, silly me, is actually enormous, and was 30 miles in the wrong direction. We turned around and found our campsite just before darkness set in, and we were able to enjoy camping under the stars. Which was awesome. Cooking my first over-an-open-flame meal in the dark, not so much. But we survived. We also survived our first experience with vault toilets, but that’s for another post. 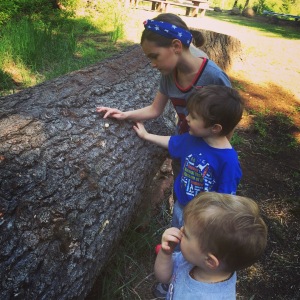 The next morning, after relishing the joys of a quiet atmosphere of a rushing river and not much else, we ate our cold cereal and some scrambled eggs (also over the fire, not as scary in the daylight), we consulted our atlas and, deciding that we should continue to enjoy the beauty of this national forest and not take the road we’d accidentally driven the day before, opted to take another rural route into Hells Canyon, Oregon, where I’d planned a hike for us. Ahhh, the sweet satisfaction of planning ahead. The route we chose looked great on paper. Totally fine, clear cut, and easy to follow. Except it was literally cut out of a mountain. You guys. More than 90% of this road- listed as a state highway mind you- was unpaved road that was solid rock on one side and sheer cliff on the other side. And we were in separate cars (because we were moving cross-country, remember). So hubs is in front of me, terrified of heights and undoubtedly full of regret at this route choice, white-knuckling his way up and back down 48 minutes of treacherous mountain path, while I, bringing up the rear, am staying 6 car-lengths behind because his little Prius is kicking up enough dust to block my vision and drive us right over the edge to our deaths. Sounds fun, right? Oh, and on this winding journey, we drive through places where people actually live- like little manufactured homes here and there throughout this rural mountain area, with tractors out front and plywood spray-painted signs that say things like “old lady has shotgun and is not afraid to use it.” Not kidding. If I hadn’t been scared that stopping my car would allow her to prove her point, I’d have taken a picture.

Needless to say, we survived, but it was a learning experience. Just because something appears to be clear and we appear to understand it because we’ve seen it and read it and viewed the whole thing in context, doesn’t mean we actually have any grasp on the reality of it whatsoever. The next three days were all very similar- they broke through stereotypes for me in really surprising ways. Outside of Walla Walla I saw more confederate flags flying than I’d seen since I left middle Georgia (how bizarre is that?), we had more mosquitos outside of Spokane than I’d seen since we moved out west, and we saw more small towns and rural communities than I even imagined existed in eastern Oregon and Washington. My vision of Oregon as a hipster-haven and Washington as a liberal-Canadian social experiment were totally dashed when our camping neighbors outside of Spokane (dad sporting a white tank top and black and white camo shorts and mom with fewer teeth than my toddler) put away 40 beers between the two of them and stayed up all night singing Wheeler Walker Jr. (To be fair, they were both very nice, and their kids played very sweetly with our kids.)

Driving northeast from Spokane to Glacier National Park took us through northern Idaho, and friends, if we win the lottery, that’s where you’ll find us. Holy smokes. Beautiful. And everywhere we stopped, people were so friendly. Not in the southern, nice-but-silently-judging-you way, but, like, genuinely helpful. As novice campers and people who legitimately spend less than 30% of our free time outdoors, this was extremely meaningful on such a big trip with little kids. Pulling in to Glacier, I presented our National Parks pass to the ranger working at the entrance (on Memorial Day weekend) letting her know that I needed to pay for my husband, who was driving behind us. (The pass allows one vehicle free admission to any national park or forest, but any additional vehicle requires an admission fee.) She winked at me and said “I don’t see any car behind you, do you?” and waved us both through. Hallelujah. Once inside the park, since all camping was first-come, first-serve, I panicked a little at seeing the crowds, but there were plenty of rangers and they all helped us find the perfect spot for our crew, close to a bathroom and away from RVs and groups of fraternity brothers. Also hallelujah.

Glacier was a blast. Beautiful, with absolutely perfect weather. But holy smokes was it cold at night. I put each of the kids in fleece pajamas and fuzzy socks and had them sleep with jackets on, and I slept in sweatpants myself, and even then we needed every bit of the quilts, fleece blankets, and down comforters I packed. It was also apparent that our very jovial, albeit noisy and somewhat rowdy neighbors in Washington were a bit of a foreshadowing for us. Our neighbors in Glacier (although not as loud or as musical as the ones in Washington) were also drinkers, and kept us ummm…entertained, for a good bit of the night. Thank God for melatonin gummies and kids who were worn out from the drive. In Glacier we hiked, we skipped stones, we had ice cream, and our kids explored. Favorite game: “Get these sticks out of jail.” Literally, my boys made a jail out of rocks, put sticks in them, and pretended that pine cones were superheroes coming to rescue the sticks from jail. They also found a fire hydrant and decorated it with pine straw and rocks and other “nature stuff.” So next time they ask for some $40 Paw Patrol whatever, I’m sending them looking for pine cones and fire hydrants.

The best part in the first few days? My kids played. Just played. My daughter made friends at every campsite we visited, and when she wanted time to herself, she excused herself to her chair for sketching or reading. My boys built more forts and huts and rock parades than they’d been able to in the throes of over-scheduling and rushing through moving coast to coast. And my hubs and I had fun together, first laughing about how absolutely inept we are at roughing it, and then celebrating when we actually figured it out and eventually felt like this was NBD. We realized there are rednecks everywhere, and that actually, no matter how hillbilly someone might appear to be, they actually might be smarter and better prepared than we are, and they’re just as entitled to enjoy their weekend roughing it with their families as we are. What a country we live in. What a country.

Stay tuned for the Yellowstone post- featuring a Bison that camps by us and kids who lure us into hikes from which we almost can’t return!