Whew! It’s been a while since I posted something legit about food here. The truth is, I genuinely love food, but I have this weird relationship with it. I’ve learned that I like real food, not the fake, chemically-derived, food-pretenders that seem to hang out all around me. And yet, that chemically-derived yuck is actually pretty tasty. Like, I could go for a hundred Marcos’ pizzas right now, you guys.

Anyway…I’ve been seeing a lot of my dermatologist these days. Turns out years of tanorexia have left me with some pretty awful souvenirs. And while I’ve seen her, I asked for her help with plaque psoriasis on my scalp (which is tantamount to torture) and the usual blemishes around my hairline, and it turns out those minor complaints that I’ve had over the last few years are **shocking!** fixable with the right diet. Let me say my dermo is NOT a naturopath- I heard her talking to the kid before me about Accutane, and I’m pretty sure she woulda been perfectly cool shooting me up with some Restylane if I’d asked her. However, maybe because I was wearing my “Peace Love Homebirth” shirt on our first appointment, or maybe because I look soooooo earth-mama (*sarcasm*), she suggested an anti-inflammatory diet to me before suggesting any medication. Because apparently anti-inflammatory drugs and foods will help with hormonal issues, asthma, skin, and digestive trouble. I’ve always gone on and off steroids for those issues in the past, and I knew long-term steroid use wasn’t good, but I’d never actually been advised by a doctor of an anti-inflammatory diet as an alternative to steroids. Her notes: “get the hell off dairy, like, yesterday,” and “really look at healthy oils like fish oil and EVOO, and include lots of nuts, mushrooms, and green leafy veggies in your diet.” The second part I could totally get with. Like, this woman couldn’t have been a better match for me if we’d met online. But… give up dairy??? Lady, do you know that’s all I have left to live for???

Well, I’ve been working on it. And you know what? It’s actually been pretty good. Not “I just climbed Mt. Kilimanjaro without oxygen” good; more like “I just navigated a three-point turn without crashing” good. I’ll admit though, coming up with genuinely vegan meals that I actually like, let alone that my kiddos will like, has not exactly been stellar. The only way I’ve actually survived up to this point is with a roadmap. So here’s the guide I follow to help me navigate meal planning each week:

Super easy, yeah? I can always come up with something that fits into these guidelines. Now I just have to cut out cheese. And butter. And heavy cream. **Sigh**

But here’s why it’s worth it: 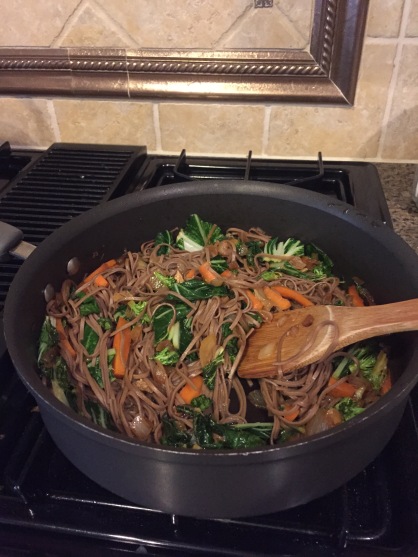 I mean, who wouldn’t want to eat that, right??? If you don’t call it vegan, I bet a bunch of men wouldn’t even realize they were eating chick food. Here’s how easy it is:

It’s literally a 10 minute meal and it is AMAZING. Even my little troop will eat this. And it’s vegan-friendly. Now I just have to figure out how to make the rest of it work that way… Here’s to a clear scalp, clear skin, and less flare-ups with asthma, sinus issues, and hormonal drama (just don’t expect to see before and after pics. I’m doing this for free, people).